If you are looking for a microscope magnifier attachment for your smartphone in the $10-15 price range, there are two very similar products sold by the same company: Neewer. Let’s compare their capabilities and performance.

First of all, the two products have confusingly similar names, so I will refer to them as the Silver and the Black. On Amazon, the Silver goes by the catchy name of Neewer 60X Zoom LED Clip-On Microscope Magnifier Micro Lens, while the Black is called Neewer 60X-100X Optical Zoom Mobile Phone LED Microscope Lens. Both products say that they will work with all leading

Both magnifiers have white LED lights to illuminate your subject, and the Silver also has an ultraviolet light, to aid in the detection of counterfeit

The Black has two features that are missing from the Silver: the ability to change the level of magnification, and a fine focus knob. With the Silver, focusing is accomplished by extending the barrel of the device, placing the clear plastic guard up against the subject, and then gently pushing the device toward the subject, causing the barrel to contract until the subject comes into focus. This works better than it may sound, but it does not provide fine focus control. The Black also has an extendable barrel, which provides for the difference in magnification, claimed to be from 60x-100x. When you are at the magnification you want, you can use the fine focus knob to bring the subject into sharp focus. Another advantage of the Black is that when you choose not to use the digital zoom on your smartphone, your subject is framed inside a tight black circle instead of a blurry circular area. One quirk of the Black is that it contains a mirror, so your image will be reversed, and zeroing in on a certain spot on your specimen requires some mental recalculation.

Here’s a side-by-side comparison. For the specimen, I chose this torn piece of a plant. I wanted to focus in on the threads resulting from the tear to show how they are filled with liquid. 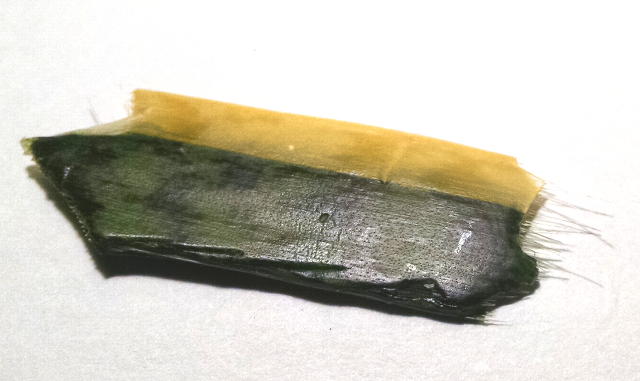 The Black is the clear winner here, as its sharper focus and greater magnification are needed to illustrate the liquid inside the plant threads. That’s not to say you can’t have fun with the Silver, which still allows you to see some pretty cool stuff that you just can’t see with the naked eye. Below is a gif from a video I took of human blood cells in motion, using the Neewer Silver attachment and my smartphone. I placed the blood between two glass slides and applied mild pressure to get the blood moving.
One other thing to note is that as you look around on Amazon, you will see what looks like the exact same product, especially the Silver, offered by other companies, such as KingMas, DBPower, and others. Judging from the product photos, it really is the exact same product. I don’t actually know if Neewer manufactures either the Black or the Silver. They are just the retailer I got both of mine from. Everything was as expected, so I do recommend Neewer, but you may want to shop around.

I hope this comparison is useful to you in choosing a smartphone magnifier. As a final comparison, here is what each product looks like when it is attached to your phone. Click the image to purchase on Amazon.